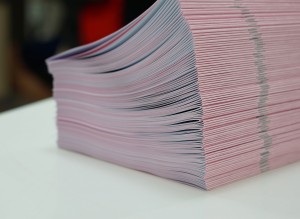 After the special silent service was finished, we left behind the pamphlets on the back table so they could be used again next year. One of the readers whose passages were highlighted in her pamphlet left hers upside down in the pile so that the person sorting them later would be able to separate it from the others. I had a part, too, so I was going to do the same thing. But the lady ahead of me saw the upside down pamphlet and assumed that the person who left it that way had been careless. She straightened it with all good intentions and moved on. When I left mine, I tried to sort them again to make it easier later on, but my efforts were foiled by another orderly person, again with the best of intentions. So I moved on, too.

So many of us make assumptions, thinking we are doing the right thing.