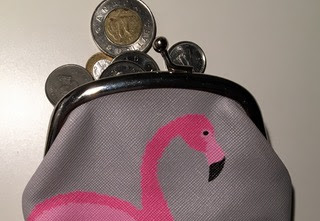 For years, I had recurring dreams about losing my purse or wallet. Years. Each dream was a bit different, but the theme was the same. A frantic search, often with the help of others to find it.
I thought it was about security or money.
But no. After ages, a lightbulb went off. It's not about the money, it's the ID!
These dreams always came up at the same time as the Creator Energy was coming up in my cards (equivalent to King of Wands if you read tarot). This is all about moving into a new identity, a new role, a new approach to things, sometimes even a new address.
That's not so scary.
The next time I had the dream, I remembered while dreaming that I didn't need to be frantic. I reassured all my helpers that they didn't need to search, it's just about the ID and all is ok. The worry vanished and the dream ended. No worry, instead I welcomed the information. I knew my life was changing and figured my subconscious was helping me work it through. Yay.
Last week, I couldn't find my wallet. My sister helped me search. She said, "That's not like you." I know. My daughter said, "That's not like you." I know.
But oddly, I wasn't too concerned. I didn't notice the loss until I was almost on the train home. I realized it could be in my car (a 1.75 hour train and bus trip away from where I stood at Union Station). If not in the car, it could be on my desk at home (another 30 minutes). So I decided not to plan 10 steps ahead and get myself all riled up. I played endless solitaire on the phone on the transit rides and when nerves started to rise, I breathed, reminded myself I was doing all I could and went back to the game.
My wallet was not in my car. Nor was it on the desk at home. So I spent the next few hours putting in a Lost and Found request with GO Transit and talking to banks and whatnot. Oddly, I still wasn't too concerned, even before the credit card people told me no one had tried to use my card.
It wasn't until the next morning, when I was lined up at the Drivers Licence office waiting for a replacement, that the light dawned again. This was all about losing my ID. Yes, I had cash in the wallet, but it was the ID I cared about. Just like my dreams.
Yes. My life is changing, I'm moving into a new role.
I guess losing my wallet in real time is just the hard-copy-version of the dreams.
That's not so scary.
…
A happy ending: GO Transit 'Lost and Found' called me 4 days later. A kind bus driver found the wallet, (my neighbour got a chance to thank him for me) and my sister picked it up at Union Station. It was intact, including the cash. Too late to stop the changes in ID I had to make, but then they were being made already.
Posted by Janet Dane at 6:47 AM