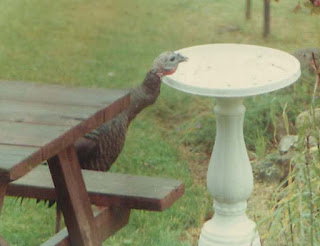 We had a turkey living in our yard for 6 years. Some of you may know the story. She was a wild turkey raised domestically that escaped and came here, where hunting laws prohibit shooting her. So she stayed.
Her presence was felt all through the neighbourhood.
Now this wasn't a sweet little songbird like a goldfinch that flitted at the feeders and sang from the trees. She was big. She emptied my bird feeders until I cut costs by buying scratch grain for her from the local feed mill. She flew to our rooftop and bounded from one end to the other barking. Thump, thump, thump, thump. Bark, bark, bark, bark. And then back again. Thump, thump, thump, thump. Bark, bark, bark, bark. And her appearance - she was not the most attractive of birds. She frustrated the neighbours' pets. When dogs chased her, she simply outran them, then lifted off to roost in the pines. When cats stalked, she stayed put on the deck railing and watched them. Every single cat backed down.
Some neighbours grumbled, but most of us enjoyed having her around. Before long, we got used to her warty, mottled face and neck, and appreciated the iridescent sheen of her feathers in the sunlight. Her spotted eggs turned up in the oddest places in the neighbourhood - beside Eva's front step, under Penny's cedar trees. I often found a few in the garden shed.
Still wild, for a few weeks each summer she flew away. She returned each afternoon for a hasty sand bath in the garden and a belly full of grain. Then off she went again. We never knew where.
It all ended one snowy midnight. I'd heard the Great Horned Owl for several nights before it struck. In the wild, turkeys like her live for about 3 years. In our yard, she lived for 6. Was there more we could have done – should have done? I don't know.
What I do know is that whenever I hear the distant call of a wild turkey in the hills, I feel a warm, sweet affection at the sound.
Posted by Janet Dane at 6:59 AM