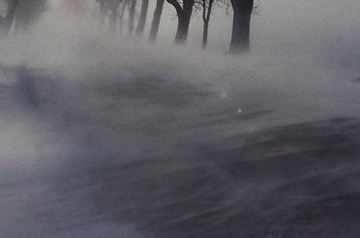 Right now even though the sun is shining, there are snow flurries off and on and the winds are high. This isn't usually a problem, but I live in an area where whiteouts are common. Blowing snow is one thing. Being unable to see past the hood of my car is another. There's only two fairly short stretches of road between my place and the highway that get bad. But one of them, the one closest to where I live, blows in a lot. When entering a whiteout there, it may only be half a km long, but the snow might be half a metre deep in drifts. You don't know until you're in the thick of it. If a car ahead is stuck in a drift you won't know it until you're on top of it. There often is.

In my neighbourhood, local culture demands people drive through the whiteouts anyway. When I told a friend who lived nearby how nervous I get about this, she confidently said, "Whiteouts don't bother me." And they didn't until one day when the wind was up and she had to drive that one short stretch of road north of me. She arrived safely, but shaken.

Until then I tended to agree with the local culture. They must be right, I must be a wimp. After that day, I realized I was the sane one. Common sense said, "Anyone who willfully enters a whiteout with zero visibility has a few screws loose."

My choice, then, is sanity. I look at the forecast and if Environment Canada says there'll be snow and winds over 30 km/hour, I pause and do a gut check. If my gut is unhappy, I change my schedule so I don't have to drive.

Call me a wimp if you like. I think I'm the opposite. It takes nerve to stand up against local culture.