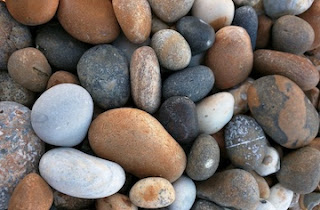 The other day when I was upset about something I caught myself holding my energy up. I got a sense that there was a bunch of heavy pebbles, massed together in my energy a few inches above my left shoulder, towards the front. They weren’t really pebbles, they just seemed that way – a mass composed of the complex stuff of the upset: blame, hurt, anger, resolve, my thoughts about it all. It was complex and heavy and disorganized.

I noticed that I was holding it up through sheer willpower. I seemed to be trying to keep the energy up by my head so I could figure it out or fix it or problem-solve or organize it (mental activities).

And it took a lot of energy to hold it there.

It was an old habit I recognized from when I was a kid. I was raised to be rational in a culture and environment where mentally solving problems was encouraged, and expressing pain or negative emotion was discouraged. It seemed natural for me to hold bad feelings and emotions up around my head where they could be attended to in a rational manner. The school of thought at the time was that life is a mechanical construct. If something seems broken, you fix it. If you feel a knot of mixed emotions, feeling and pain, then you hold it up so it could be attended to.

Yet life is much more fluid and mysterious than that.

It took me a half a lifetime to learn that negative emotions don’t have to be solved or fixed. They only need to be felt, and then they naturally pass out of our experience. By holding them up near my head, I was blocking that natural process, encouraging the type of “This is Awful” thinking that can make it all linger and intensify. By trying to escape the pain, I was making it worse.

So as I noticed this heavy mass of pebbles, I released the effort of holding it all up and watched to see what would happen next. I wondered if it might solidify into the coldness of fear in my belly, or the heat of anger in my shoulders, or the weight of sadness in my chest.

Turns out it didn’t do any of that. It just went away. Poof!

And the phrase “Drop it!” took on a whole new meaning.


First published in December 2009 in my free monthly email newsletter, Starry Night. Sign up here.
Posted by Janet Dane at 9:36 AM