My sister Judy, says, “Everything I’ve learned about life, I learned from Star Trek.” It’s a joke of course, but there’s a kernel of truth to it. Insight can come from just about anywhere, even fiction. For me, sometimes Stephanie Plum has something to teach me about life. Sometimes it Cadfael.

This time, it was Data, the android, from Star Trek. I recalled an episode when, after he lost a game, Data was told by the Captain that it is possible to do everything right and still fail.

Wise words, but I didn’t realize until the other night that deep down, I didn’t altogether believe it.

It started when I banged my Jeep against the guard rails on an icy hill. Nothing serious. No one else involved. No one hurt. And when I say I couldn’t have done anything to prevent it, I really couldn’t. Believe me, I tried. I scrambled to find a rational reason for it. I tried to think of something I could have done differently. But there was nothing. It wasn’t anyone’s fault – not the Township’s not the other driver’s, not 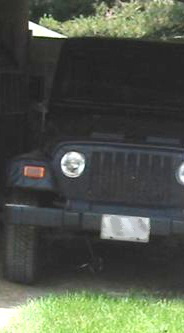 even mine. I’d had no intuitive hints that I might have ignored. I couldn’t even use the all-occasion “must have been driving too fast for the road conditions” reason. There was nothing I could have done.

This was an uncomfortable realization – not something I wanted to dwell on. It shook my confidence in my ability to manage life. So I resisted. The next day, in a last attempt to cling to the old belief, I caught myself phoning the Township, hoping somehow they could be at fault. But I knew even as I called that this wasn’t about blame. It was all about me still resisting, still trying to make the old belief fit the new reality.

Well, some beliefs don’t go down without a fight…

The next night I had a dream which added more meaning. I dreamed that I failed an exam – utterly, shamefully, and earned the disappointment of people whose opinion I cared about. Even though I had no memory of writing it and no idea what was required of me, there was no excuse for this bad result. I felt awful – helpless, stupid, unworthy of respect. Yet there was nothing else I could have done.

I found this dream to be revealing – even beautiful.

I knew it was related to the Jeep sliding sideways down an icy hill, so I lay in bed and mulled it over. The dream wasn’t about failure, it was about failing to measure up to impossible standards, including my own. It was about pride and humility and performance and self-esteem – issues I have been actively exploring for some time.

Childhood memories floated up as I lay there. I recalled my brother’s friends when I was a kid. The boys would sometimes lob a ball at me hard, and then shout “Think fast!” a microsecond too late for me to react. For the boys, reaction time was very important. If you could react quickly, you were respected. That left me with bruises on my shoulders and a subtle belief that if I could learn to think better or plan better, maybe I could be safe, or maybe I would be respected. I was too young to realize that the boys set me up to fail so that they could feel powerful. It would never have been possible to “Think fast” enough. I also recalled the report my Grade 1 teacher sent home to my parents. I loved Mrs. Story and would have done anything for her, so it came as a shock when she reported that I was “not taking school seriously enough” and gave me a bad grade. I met the same sort of thing 12 years later when I was in nursing school. And again later in an interaction with a close relative. I had not measured up. Not for what I did, but for who I was. There was nothing I could have done.

All these memories showed me how the belief, “I can manage life” came about. And they brought me to Data’s story. In his story, his confidence in himself was shaken by the fact that even though he made all the right moves, his opponent won, but Picard’s words gave Data an opportunity to see it in a new way.

As did all these things for me. Insight came in different ways: a dinged-up Jeep, a Star Trek story, childhood memories, an emotional dream. Each had something useful to say. I may have preferred to leave out the Jeep part, but then again maybe I needed it to have an impact. (Yes, that was a pun.)

Judy said that everything she learned about life, she learned from Star Trek. Whether insight comes from an inspirational teaching, a movie, a memory, a walk in the woods, or the wisdom of Stephanie Plum, it feels great to air out some of that old stuff and process it in a new way. We may resist the changes that insight demands, but it is so worth it. It makes for fresh starts.