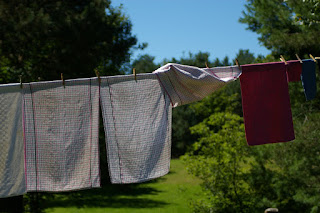 We all have heard the advice to live each day as though it were our last. But what does that mean? How do we measure a day? When is it well spent?

There used to be a little voice in the back of my head that scolded me when I sat out in the sunshine reading a book. It told me that I was wasting time. I’d see the weedy garden, the dust on the floors and think about that unfinished article in my in-basket and feel a bit guilty for enjoying the sound of the birds and crisp freshness of the air. As though I was wasting time that would be better spent on, well, something better.

Given that I was raised in a part of the world that frowns a bit on leisure and considers joyful activities a little selfish, it’s no wonder I heard that scolding voice. Any activity that wasn’t about achievement or hard work was suspicious. And since I wasn’t Mother Teresa, selflessly giving all I am to others, and since I wasn’t likely to invent that next amazing widget, the invention that would change the world, I was clearly not contributing to the world by sitting in the sunshine reading a book.

In an article on the BBC website a while back, people who were dying were asked what they found important about their days. One man suggested we get off the daily treadmill and process more about life. He said, “I was walking on the North Yorkshire moors recently, I was high up and the heather was out. I just felt I was on the ceiling of the sky almost. It was an incredibly intense feeling of happiness.” Another said, “Living in Dorset we have a whole number of different types of cheese, I just thought I want to try as many different varieties of them as I can.” He also suggested that we tell people we love them. He said, “I wouldn’t wait until you have an illness or anything like that, get on and do it now.”

For those in the article, it wasn’t about what they accomplished, it was about finding value in each day. One woman said, “You hear people say that if your days are numbered then every day has to be superb. It becomes a terrible pressure. I let myself be, I let go of that voice that says all time must be valuably used. You let yourself be what you can be that day. Letting go of that… daily check list of achievements is freeing and the world still works without you. I actually felt really alive, I was examining the texture of everything around me.” Living each day fully for each of them was different. Cheese. Walking the hills. Living with their senses. Talking with loved ones. It wasn’t about dying. It was about living.

For me, I found over time that the little scolding voice in the back of my head would quiet a bit if I mixed work and pleasure. I might not have to hang laundry on the line to get my clothes dry, but I love the time spent hanging it out – the coolness of the damp fabric, the sunshine, the birds and trees. I may not have to walk up to the mailbox for the mail, but it gives me a chance to smell the earth after a rain or make a gentler transition between one task and another.

Eventually that scolding little voice in the back of my head vanished. I came to realize that living each day is about spending time on what I value. And some days, sitting out in the sunshine reading a book is the very best thing I could be doing with my time.