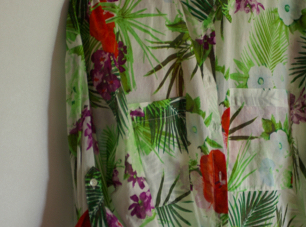 I have a card in my tarot deck called "Nothingness." It refers to a time of transition. That in-between time. Something is finished and the next thing not yet in sight.

I can always tell when I am in the middle of another gap: I go to the store, eager to buy a new top, ready for the fresh and new. I pick up the perfect top, then get it home and realize that it wasn't as perfect as I'd thought. It can take two or three tries like this before I get smart and give it up for a while. During the gap time, I feel creative and eager to jump into a new project, but no matter how hard I try, it's just not right. It's as though part of me is embracing the new me, but the old me hasn't quite let go.

During the gap, nothing seems to fit right. Nothing seems to work right. Stuff around me may break down, first the car, then the fridge, then 2 lightbulbs on the same day. It can be uncomfortable.

When I swapped out from a Windows computer to a Mac, there was this awful period between being competent on my old computer and being competent on the Mac. Suddenly I was in neither world. I was stupid on the Mac, and when I needed to work on the windows computer, I found I was newly-stupid on it too. My sister (who is a computer teacher) told me to expect to be stupid on both for a while. "Give it 6 weeks," she said. "Then you'll be fine on both again." All I could do was keep at it, give more time to any work I had to do on the computer, and wait it out, trusting that I really would be fine with the change. She was right. It took about 6 weeks.

When we move through the gap we discover that we aren't quite who we thought we were. We are re-creating ourselves. That's where the word recreation originated - renewing ourselves, even in the sense of mental or spiritual renewal. It's a good time to think new thoughts, to let ideas drift through, form and coalesce, then separate and form new patterns. It's a good time for insight to arise, but also a good time not to settle on any of it as a concrete truth. It doesn't hurt for me to remind myself that who I think I am is just a mental idea - a snapshot that I like to carry in my pocket. Yet the snapshot doesn't give me the whole picture. It can't accurately say who I was when I made it, who I am right now, or who I am becoming.

In my tarot deck, this gap time is described as a time rich with possibilities that have not yet manifested themselves. It's not a time for doing, but a time for being. So if I feel a strong desire to go shopping for a new top, I might want to leave my money at home. If the top I see in the store is really all that perfect, it'll be there later on. It might be better to drift a bit, and relax as I re-form myself. As my mother used to say, it's a good time to "Make haste slowly."